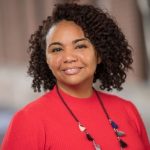 All are welcome to attend.
Live streaming is not available for this event.