Background
Paul Haskins has worked for 36 years in commercial insurance, with a particular expertise forming and working with single-parent captive insurance companies. Most of his captive work has been focused in the healthcare industry with emphasis on integrating merged or acquired healthcare systems.

What is an insurance captive and how many are owned and operated by NFP (not for profit) U.S. health systems?
Captives can take many forms, but a widely accepted definition is:  “A closely held insurance company whose insurance business is primarily supplied and controlled by its owners, and in which the insureds are the primary beneficiaries.”  In its purest and most common form – a single-parent captive that insures only its parent organization – a captive is effectively formalized self-insurance. There are approximately 400-500 captive insurance companies owned by NFP health systems in the U.S.

For larger NFP health care systems, and even medium-sized ones, it is the professional liability exposure that drives decision-making in terms of owning a captive.  Nearly all are required to carry some level of deductible or self-insured retention.  Of those, it is estimated that about half are using a captive to fund that retention.  The other half simply retains the risk informally on their balance sheet, or funds it more formally using a trust.  In general, the larger the organization, the more likely they are to use a captive to fund their professional liability and other retained risks.

Why have so many NFP health systems chosen this strategy and how long have they been around?
Captives in health care go back to the mid-1970’s, a period when traditional professional liability insurance carriers were dramatically raising rates or exiting the market altogether.  Many health care organizations found themselves without coverage at a reasonable cost, and some couldn’t buy it at any price.  These organizations then either formed their own single-parent captives, or banded together in groups to form “bedpan mutuals” (as they were called then), which are really just group captives.  A number of these group captives grew and survive today as commercial professional liability insurance companies.

They chose this strategy because a captive offers the greatest level of control of the insurance program to its owner-insureds:  From underwriting (who gets coverage, and at what premium), to claim-handling and defense strategy, to risk mitigation, and how any surplus funds get distributed.  It literally means running your own mini-insurance company.

Are all captives “off shore” and if not, what are the opportunities for the strategy “on” and “off shore”?
No, not all are offshore.  In the early days of captives, only domiciles like Bermuda or Cayman offered a regulatory environment favorable to operating a captive.  Lacking special captive legislation at that time, the rate filings, administration, and other regulatory requirements in the U.S. were so onerous that operating a domestic captive simply wasn’t feasible.  As a result, many healthcare captives were formed offshore, and most remain there today.

But by the late 1980’s, a few U.S. states began to see the captive business as an opportunity to attract white-collar jobs, tourism, and tax dollars.  Vermont was the first to do so, and was successful in attracting new captives and transferring in some from offshore.  While Vermont remains the domestic leader, there are now over 30 U.S. jurisdictions with favorable captive legislation.  Domestic domiciles have taken away a large share of new captive formations from the traditional offshore domiciles.  In fact, we are beginning to see more offshore captives moving back onshore, as it becomes clear there are now stable and cost-effective alternatives in many U.S. states.

(See diagram in appendix for basic operations of a captive for a health system owner)
The basic premise behind a captive is to save money by being able to purchase less commercial insurance, yet do so in an actuarially sound way.  Commercial insurers have considerable profit and overhead expense loadings in their premiums (about 30% on average, including claim-handling).  Trading dollars with an insurance company for first-dollar coverage simply is inefficient.  By taking high deductibles – for example, $500k per claim or more – healthcare organizations can reduce their premiums, and use the captive to fund that primary layer of risk.  Doing that also insulates your firm from most of the up and down premium cycles of the commercial market.  Further, the captive holds and invests the premiums and loss reserves that otherwise would be invested by a commercial insurer.  For long-tail coverage like professional liability, that money may be invested for several years.Captives can generally operate with very low expense ratios.  Most captives don’t have full-time employees.  Most of the needed services are performed by outside vendors and consultants, and the parent’s key executives usually serve as the captive’s board members.Is there a size and scale required to make it worthwhile?
A single-parent captive costs a minimum of about $125,000 annually to operate.  The main expense is hiring a captive manager to maintain the captive’s books and manage the day-to-day operations in the selected domicile.  Other costs include auditing, government fees or taxes, actuarial services, legal fees, claim-handling fees, consulting fees, and travel costs for annual board meetings.  In order to overcome the operating cost, a captive generally needs to have at least $1.5M annually in premiums for the program to generate enough savings.How is the opportunity explained to a health system board?  In other words, what is the “elevator speech” in support of the concept?
When we present the concept to the board, we make the case that a captive is a long-term strategy for changing the way the organization finances risk.  A captive is not something you jump in and out of year to year.  It is a formalized way to take control of your risk and how it is funded.  Over time, as surplus grows on the captive’s balance sheet, additional lines of risk can be added so that even less commercial insurance needs to be purchased on those coverages.  For example, we are seeing many healthcare systems use their captives to fund a layer of their medical stop-loss coverage, taking the attachment point of the commercial coverage to $750k per claim or more.What is the range of potential benefits, from the basic to the most expansive and innovative, in the marketplace?
Beyond the direct cost savings of buying less commercial insurance mentioned earlier, there are a number of qualitative benefits to using a captive, including:Portfolio effect:  Managing multiple, uncorrelated exposures in a single captive can reduce the overall risk – or volatility of outcomes – in the program, compared to funding them separately.  This is the same portfolio effect one gets from holding a diversified portfolio of investments.  In addition to general & professional liability, other risks that we are seeing added to captives include:
Funding of uninsured risks:  In addition to retentions of insurable risks, there may be risks that are not generally insurable in the commercial market for which a client may want to formally self-insure in their captive.  This could include contractual obligations, punitive damages, etc.

Employee benefits potential:  Established captives with a U.S. domicile may be able to provide reinsurance for some of their ERISA-subject employee benefits, such as group life insurance, group disability, AD&D, etc.  Underwriting a significant amount of employee benefits can enhance the captive’s case for favorable tax treatment.

Mergers & acquisitions:  Captives can help manage the transitions of loss portfolios when acquiring or divesting another organization.  Books of liabilities (such as risk within a professional liability or workers’ compensation deductible program) can be more efficiently measured, and funded, and transferred when an existing captive is in place.

Enhanced risk control:  Many of our clients develop an enhanced approach to patient safety and risk control when they take greater retentions and control over their own program.  Captives can also be used to help fund incentive programs at the operating unit level.

Access to reinsurance:  Established captives may have access to reinsurance markets not otherwise accessible to the parent company.  Reinsurers are generally more cost-effective sources of pure risk transfer, much like buying from a wholesaler.

Management of charges to operating units:  The captive can facilitate the allocation, funding, and administration of deductibles to operating units.  This is usually done by applying the actuary’s rates to each unit’s exposure base.  Some clients will use the allocations as a means of rewarding and punishing units to provide incentives for improved risk control.  It is also possible offer lower “internal deductibles” to different operating units based on their size, in return for an actuarially-adjusted premium.

Why doesn’t every NFP U.S. health system own and operate an insurance captive and what are the inherent risks?
Inertia, and sometimes it’s simply discomfort with the concepts of operating an insurance entity.  Running a captive is more complicated than simply buying an insurance policy, and it does take some management attention to oversee the work of the captive. Beyond that, the main downside risk of a captive is that it is not prudently funded and operated.  The captive needs to take measured amounts of risk (as determined by a qualified actuary), and have sufficient capital to withstand an adverse year.  Otherwise, the captive will either close down, or require a capital infusion to keep it operational.

Have there been “disasters” with captives owned by NFP U.S. health systems and if so, what lessons were learned?
It would be a stretch to describe a failed captive as a “disaster,” as captives often just take the same level of risk the parent already had before the existence of the captive.  Where we see the most problems is after a very large loss in the first year or two, before the captive has a chance to build its own surplus.  In most of those cases, the parent simply infuses the needed capital to maintain solvency, and captive operations continue as before.

What are the innovative opportunities on the horizon for insurance captives and how do they fit with provider-side consolidation and integration?
With the major trend of employed physicians in the larger systems, we of course are seeing consolidation of insurance under a single large, shared blanket limit of insurance.  They also share defense and claim-handling service.  This is generally good for physicians, as they now have access to higher limits often at the same or lower premium than they were paying before.  Systems that have captives are simply rolling in the physician coverage as well.  In some cases, we see health system captives offer coverage to an independent physician group, but there are some regulatory limitations to doing that.

Beyond that, we expect more health systems will add lines of coverage beyond just professional liability, with workers’ compensation and medical stop-loss among the larger additions.

Are there key risk considerations before bringing a new hospital or clinic into an existing captive?
Yes!  Before acquiring any hospital or clinic, the loss history of the target firm needs to be reviewed by a qualified consultant and/or actuary.  If the rate of losses is excessive compared to the industry average, the reasons for it need to be investigated.  Further, if the target firm has a large deductible or retention, then an independent actuary should provide an opinion on the value of the existing loss reserves.  In some cases that value could have a material effect on the acquisition price.
Appendix 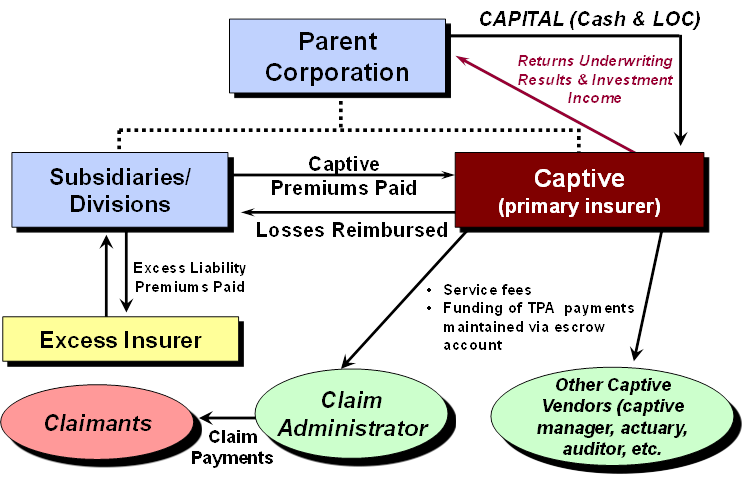 Figure 1. Depiction of typical captive ownership structure and the major flows of funds.

In this holding company example, the parent puts out the share capital of the captive, so the captive is a brother-sister holding with the other operating units.  The captive then returns the underwriting results and net income to the parent.